Recently, one of my friends came to visit us to help make honey. Before we started, we sat down to have some coffee, and she asked me about a post that was shared in our Being with horses Group. She briefly described the contents of the post, and that she was disappointed to see that kind of post in the group without any response from the other members. “No, I didn’t see it” I said. The post shared a seemingly nice story about communication and the emotions of the horse. But, the writer practiced natural horsemanship, and was sitting on an incredibly sad horse. Soon after this conversation, I was teaching a seminar, and next to us were horsemanship trainers working their horses. These events bring me to explain here what differentiates Being with horses…from natural horsemanship. I was already studying with my former teacher when I received my first book on natural horsemanship. Back then during the mid-90’s, many different alternative training methods came out, but the one that stuck around is what is now known as natural horsemanship. I asked myself how this could be, the majority of horses worked in this way didn’t look particularly happy. After I read the first few sentences of that book it became clear: they were talking about friendship, seeing your horse as a partner, respectful treatment, the seven “games” etc. The result will be a wonderful relationship, just as we’d always wanted. But was that really true?

The pictures in the book told another story. The horses appeared sad, submissive, and subjugated, and there was a photo of the author, sitting on a very young horse whose mouth was pulled wide open due to the harsh use of the bit. The horse, a young mare, was much too small for the rather large, muscular man. I thought to myself, “someone who puts photos like this one in his book and describes this as normal treatment will never realize the wrong he is doing.” Later, I learned that people practicing natural horsemanship also work with imprinting, based on Miller’s work. If you read one of his early books, you will see the worst of the worst in regards to published books on horse training. The horses depicted there are some of the saddest horses I have ever seen – humiliated, constricted, harassed, traumatized. He doesn’t like stallions, so he said in interviews, because he wants horses that function perfectly.

But what even is imprinting? The idea is to get the young horse to recognize you as a type of ‘parent’ or caretaker in order to make them easier to handle, and in behavioral research this is a controversial practice. The deciding factor in Miller’s approach is that the horse immediately learns that humans are stronger than them. So, they are touched all over their bodies, held to the ground, and later are kept from leaving when they don’t feel comfortable in a situation. The foal realizes, “I don’t stand a chance, I have to do what they tell me to do” or “I give up.” Behind this practice is the assumption that, once the horse is older, they will use their strength to resist humans and therefore one must show the horse from the beginning that one can dominate it.

But wait, should the horse be seen as one’s partner? If we are communicating with horses on such a level that allows us to form a friendship, why should they resist? A good friend likes being around us, helps us in times of need, and does so because they want to, not because we force them. And yet, many horsemanship trainers advocate for “breaking” horses early, before they become too strong to resist. I once read an article about child marriage in other countries, and several of the men there said that girls should be married off early, because otherwise they might develop their own will. In both cases, one wants to enslave another being, turning them into a being that doesn’t resist maltreatment and does as they are told. People like this apparently only feel safe when they are in absolute control and are exerting their power over another being.

Horsemanship was born out of the Western scene, and we must realize that the kinds of methods used to train working horses are not exactly gentle – those horses had to work (in both senses of the word). In that case, sure, natural horsemanship may be less brutal. But, even today the horse is seen as a work-or sport machine rather than an individual being with feelings and needs. People want that the horse follows orders perfectly upon every signal, and if it doesn’t it is subjected to intense stress. The rider will make ‘disobedience’ uncomfortable by subjecting the horse to exercises such as backing up, yielding, and lungeing or round-penning the horse until they submit. This is repeated until the horse ‘learns’ that this won’t happen if he does as he is told always and immediately. In the same vein, in the beginning the person may claim their own space, but instead of stopping when the horse respectfully gives them space and praising them, it again is made into a training exercise where the horse must back up or yield until they again simply do as they are told. The respectful act of moving away or giving space is turned into an exercise to assert one’s dominance, and the horse sees very little sense in this. Especially sensitive and polite horses will become disturbed and traumatized from this kind of treatment, as they naturally already respect people. Protecting or claiming your personal space is only necessary if you feel the horse is too close for comfort, and the horse will always understand your intention because this manner of self-protection is natural. If I have a good relationship with another being, such as my child, partner, or horse, then my individual space may become smaller as I feel more comfortable, and this type of contact and connection feels good for both parties. Thus, only those whom we feel comfortable with are allowed in our personal space. Similarly, we don’t touch the horse’s face if they clearly communicate that they don’t like it. They may turn their head, wrinkle their nostrils, tense their mouth, or lay their ears back – this means “no.”

Now, when the vet or farrier comes, the horse should trust us enough to allow strangers to treat them, even though they may not have a friendship with them. We will also go to the dentist, even though we don’t like it, because we know we will feel better afterwards. However, in horsemanship training, the horses must allow anyone to do anything with them, they are forced to do so. This causes immense stress, until they realize that it will be over faster if they just submit. This type of submission cannot be mistaken for trust. These horses experience intense stress, and learn that they are never allowed to communicate. Most of them shut down completely. I seldom see horses as traumatized as the ones owned by people who practice natural horsemanship. Because these horses have learned to recognize humans and their body language as something used to manipulate them, it takes a long time to break their patterns as they immediately start performing random exercises or shut down. It takes a long time for them to realize that they don’t need to function anymore, but that they can “speak” and make their own decisions around humans. Oppression forbids reciprocal dialogue, no matter if you are a human or a horse. We can only understand another being when they are allowed to express themselves. That’s why mutual communication is imperative to building a trusting relationship – but what we so often see are one way conversations from the top to the bottom that are more like a dictatorship. If I see horses as a sensate, social beings, I will approach them differently than those who assume the horses will always resist them. Most horses are friendly and social beings, and it doesn’t take much to earn their respect, especially not in the form of obedience training.

We should ask ourselves why the horse is resisting, and if it is not us and the way we are treating them that is causing their resistance – with our senseless exercises and callous exploitation and harassment of other living beings for our recreational purposes. Most horses won’t resist, they will give up and do as they are told. If you have a horse that fights back, that says “no!” then be grateful that you are given a chance to think twice about your actions and learn to do better. Consider your expectations, and why your horse might not want to, or might not be able to meet them. And ask yourself how you would feel if you had to do all the things you force your horse to do. Changing our perspective can sometimes work wonders, not just in regards to our horses… 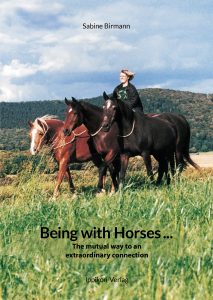